Skip to content
Subscribe to the E.V.A. newsletter and stay up to dateSubscribe
27.04.2018/Leaders, Public talks
On the 20th of April the 6th International Conference on HIV and AIDS in Eastern Europe and Central Asia (EECAAC) 2018 came to an end.…

On the 20th of April the 6th International Conference on HIV and AIDS in Eastern Europe and Central Asia (EECAAC) 2018 came to an end. In mass media and social networks there were myriad of views about the event. EVA also decided to share about our participation in the conference and express our impressions of the event.

At the official meeting conference participants carefully chose their words and tried to develop a dialogue between doctors, experts, government representatives and activists while on Facebook the group EECAAC without the tie. Informal conference diary was created where participants could freely discuss the speakers’ presentations, protests, and also simply share interesting articles and share pictures. The group’s administrator journalist Oksana Maklalova shares, “The idea belongs to Maria Kostareva, someone who worked as the press secretary for the oblast AIDS Center for many years (now Maris works in the New Life foundation). She proposed the creation of such a group so that the conference participants could discuss everything that remains outstanding outside the bureaux and sessions”. We thank the administrators: your group helped maintain an emotional equilibrium.

Going into further detail about the session on Women and HIV, the most significant discussion for EVA. In the first presentation entitled Research on Sexual and Reproductive Health of Women Living with HIV in the EECA Region Alina Yaroslavskaya from the Eurasian Women’s Network on AIDS spoke about the high level of ovarian cancer. In the list of reasons, Yaroslavskaya mentioned the low level of personal responsibility for one’s health, high costs for the full cycle of tests (for vulnerable groups and the poorest socioeconomic groups of the population), lack of motivation or the absence of accurate information for patients.

During the last presentation of the session Anna Popova, a scientific staff member of Rospotrebnadzor, continued on the topic raised by Alina Yaroslavskaya on the feasibility of HPV testing among women with HIV. The most dangerous types of human papillomavirus causing ovarian cancer are HPV 16 and 18. Any woman older than 30 is recommended to be tested for HPV every three years. However for women living with HIV this is insufficient, they should regularly have a full screening considering that research did not show a significant link between HPV 16 or 18 and cancer for women living with HIV. 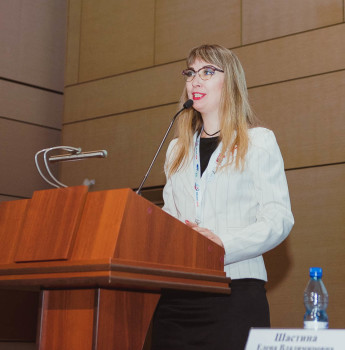 Elena Shastina EVA member and Director of the New Life organization also took part in the session on Women and HIV, presented on Increasing Adherence to Treatment Among Women After Childbirth: Problems and Approaches (in Russian).

It is worth mentioning other participation from EVA members in other discussions. Julia Godunova presented at the session on successful practices in implementing nonprofits’ objectives at the state level in EECA countries with a presentation entitled Russian experience on the interaction of civil society and state agencies (the main points can be found here in Russian). Additionally Ivetta Sergeeva, The Association’s Development Specialist spoke in the session on civil society on the access of women living with HIV to medical care as well as on counseling on issues of adherence to treatment, crisis support in difficult situations in Uzbekistan, Kazakhstan, Russia and Ukraine.

Elena Schastina shared her impression on EECAAC 2018: “The conference is a platform to present the best practices and designations of the priorities for collaborative action. But for me personally this is, first of all, professional growth and expanding one’s horizons in a direct sense. It’s a shame that the important sessions were conducted simultaneously and it was impossible to attend them all but we delegated among ourselves and then shared the information and our impressions. Of course EECAAC is also a place to be inspired by people, amazing people, who are dedicate to their cause. There is nowhere else in Russia I can meet so many colleagues and specialists from different countries in the same place.”

Forum of patients and specialists in the space of HIV
March 23 in St. Petersburg hosted the Forum of patients and helping professionals in the area of HIV. 39 participants…
Peer consulting
Why Help Those You Don’t Want to Help?
On the 27th of February in the Saint Petersburg state media center a round table entitled “Why Help Those You…
Peer consulting
Health in the LGBT Community
NP E.V.A. representative Maria Godlevskaya took part in the Health in the LGBT Community forum that was held in Saint…
Human rights
Support. Don’t Punish
A round table took place in Saint Petersburg on the issues of prevention and treatment for drug dependency.   On…
Support E.V.A.
Donate

For 8 years we have been helping HIV-positive women all over Russia to unite and set aside their rights and their dignity as equals among equals.