Skip to content
Subscribe to the E.V.A. newsletter and stay up to dateSubscribe
15.10.2015/Regional Stories
The 11th of October is International Day of the Girl Child. In anticipation of this date, an event for HIV-positive girls and girls affected by…

The 11th of October is International Day of the Girl Child. In anticipation of this date, an event for HIV-positive girls and girls affected by HIV was held in a couple of Russian cities.

The 11th of October is International Day of the Girl Child. In anticipation of this date, an event for HIV-positive girls and girls affected by HIV was held in a couple of Russian cities. The activities were organized by AHF Russia, NP E.V.A., the Svetlana Izambaeva Foundation and the Era of Health Foundation. 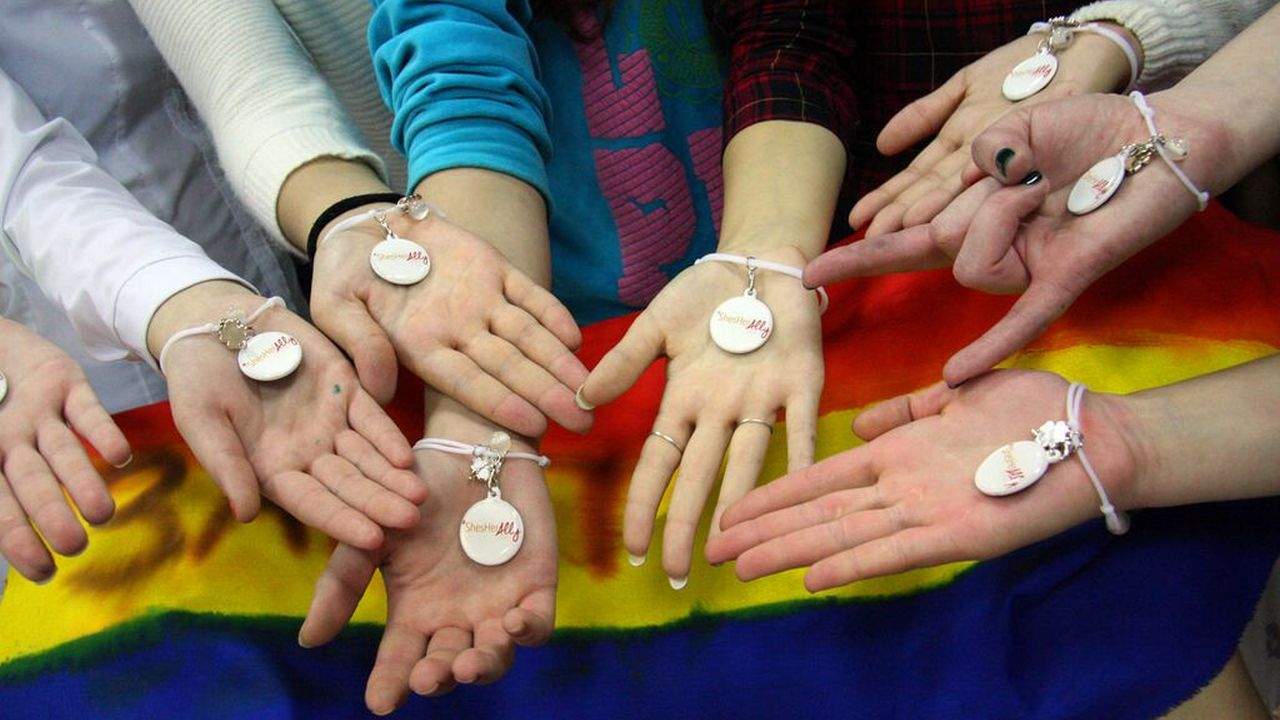 18 girls – 9 of whom live with HIV, and 12 adults – parents and guardians took part in the event in Kazan. The girls’ ages ranged from 6 to 17 years old. 16 girls participated in the event in Ekaterinburg, 11 of whom were teenagers aged 13 to 15, plus a psychologist, Elena Rizhkova, photographer, Anna Merkusheva, and additionally employees from the Sverdlovsk Regional Center for the Prevention and Treatment of HIV-infection, E.V.A. members Ksenia Gogoleva and Evgenia Burina. 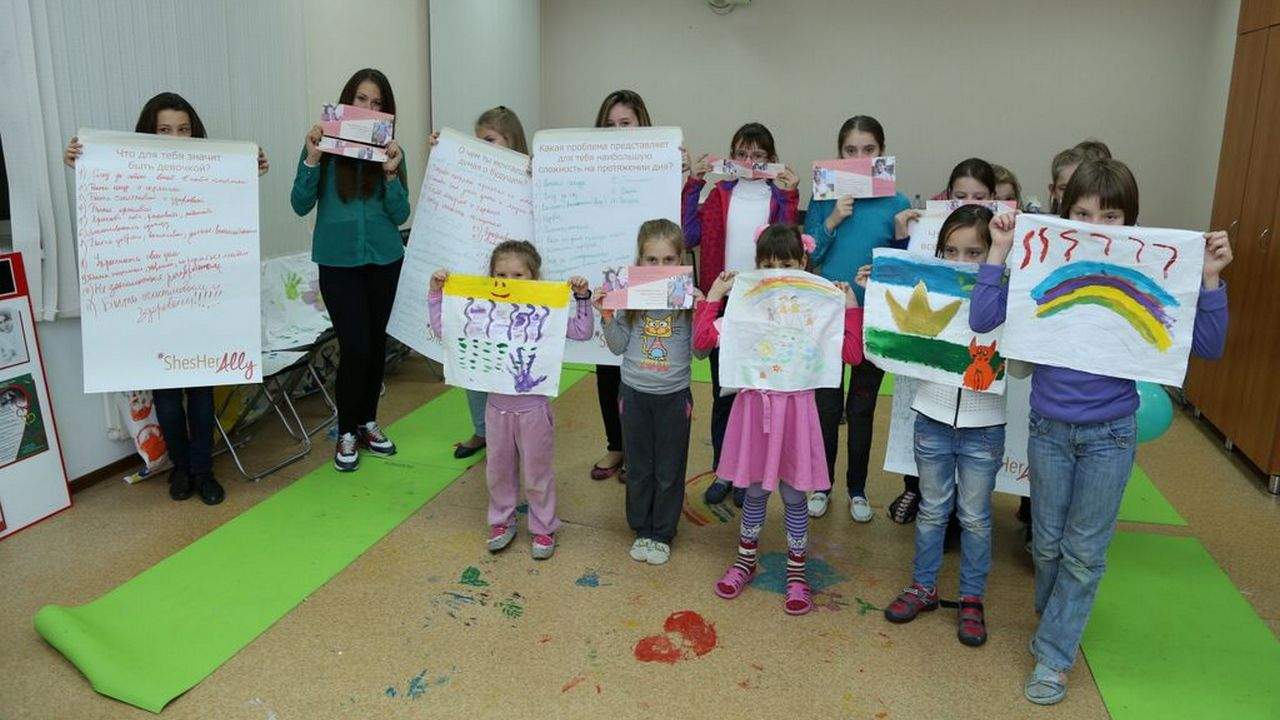 The training in Kazan began with an ice-breaker called ‘Snowball’ where each girl told about herself, about what she does for fun and why she decided to participate in the event. Then the girls drew themselves on large pieces of paper in full size. After lunch each girl cut out images from magazines and made a dream map, which she then shared with the group. Furthermore, the girls made individual flags and a group flag. At the end of the training there was a discussion about the challenges of taking ARVT and how to cope with these difficulties.

“The training started with traditional introductions. An interesting activity was used to help the girls introduce themselves: in a circle the girls were to express their mood using brightly-colored scarves by making figures to share their inner feelings and then telling about what it meant to them. The result of this exercise was a bright composition of all the individual components, which included a starry night sky, a blue sea, a bright sun, and it was all enveloped by a red scarf making a heart. 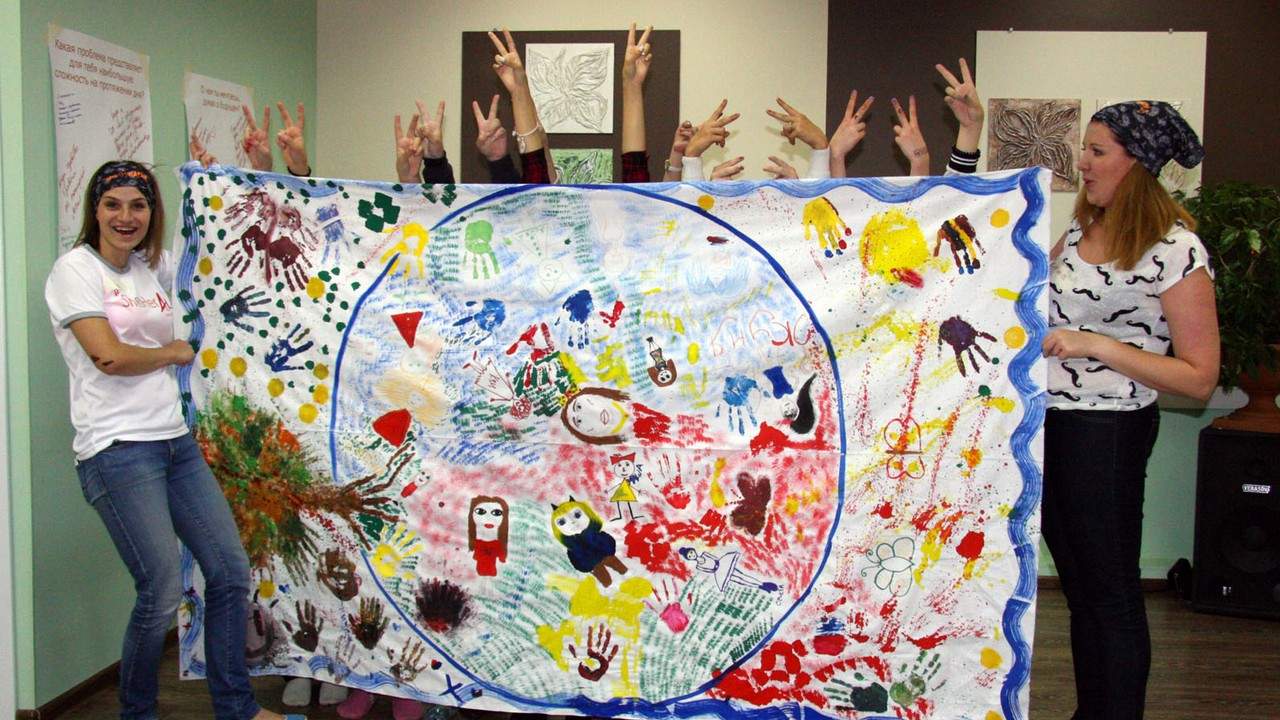 The introductions continued in the form of interviews. After each girl spoke about herself, they broke into pairs and were to tell about their partner in the first person, as if they were them.

The trainer Elena Rizhkova is not your typical psychologist. She uses many interesting materials in her work. The next activity for the girls was to work with kinesthetic sand, which is a mixture of sand and clay. Each girl created a figure from the sand, hearts, ying-yangs, mountains, clocks, animal faces…

Following lunch the trainers decided to energize the participants a bit with some dance. The point of the activity was to move their bodies to express their feelings. The girls requested songs to which they moved. It helped to relax the girls and allowed them to enjoy the activity.

After the dancing the girls were ready to talk about themselves and about their worries. The majority of them shared about the difficulties in relationships with family and friends and that at home they aren’t always understood and they are not permitted to do things. The girls also talked about their fears in having relationships with boys, about how difficult it is to start dating and how painful it is to break up. Several participants shared stories, some cried, some told their secrets. 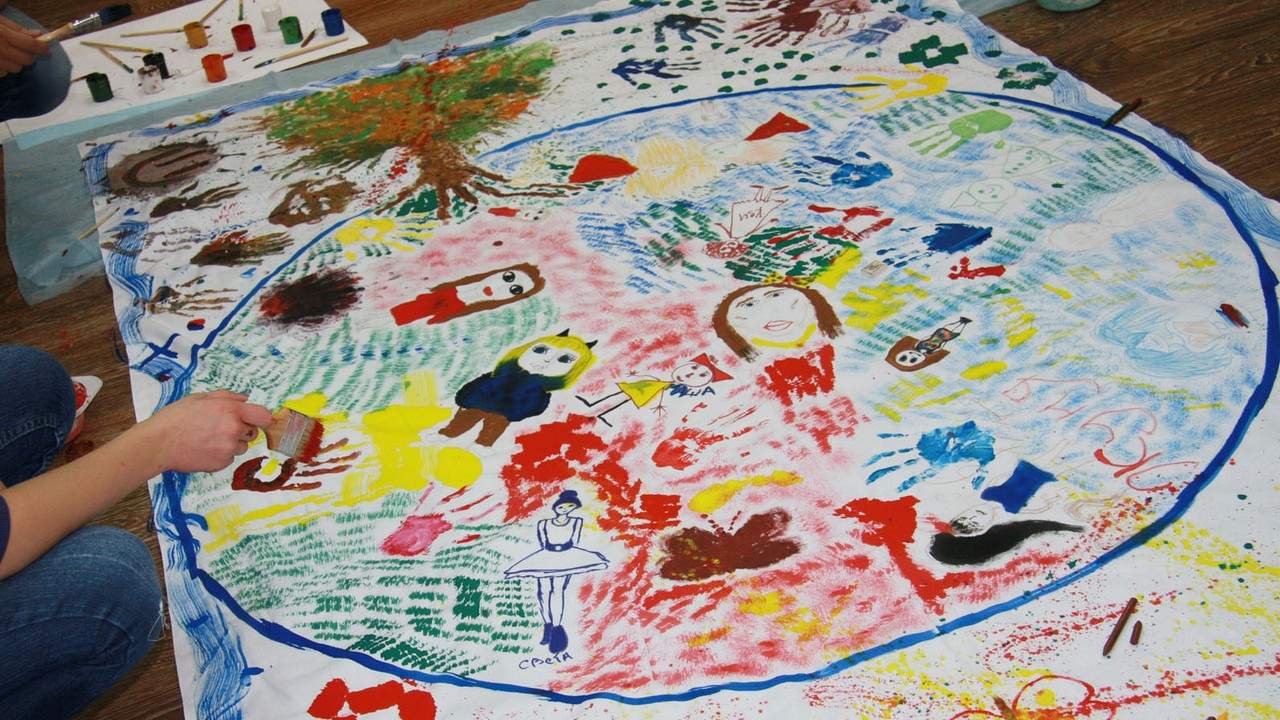 After the group discussion the trainer offered another unusual activity, which she remarked was from adult psychotherapy. The girls were to get into groups of three and play family, switching roles. The participants really enjoyed being the children in this game. The activity and the following discussion really brought the girls together and showed that they are all quite similar and they all have something to learn.

Another interesting technique was an exercise with ‘Magic cloth’. At first it looks like a regular piece of dark blue material but it could act like a house and fit all the participants inside, they could all stand and move. The participants all grabbed an edge of the cloth and spread it out over their heads and then sat on it. One of the girls compared the circle to a globe, which we can all hang onto reliably.

After a short snack break the participants enthusiastically prepared a big flag. The trainers solicited 5 ideas for the flag and then the entire group decided to combine all of the ideas together. So they started to draw a globe in which each girl drew themselves and around the globe there were secret symbols: hearts, trees, and hands. 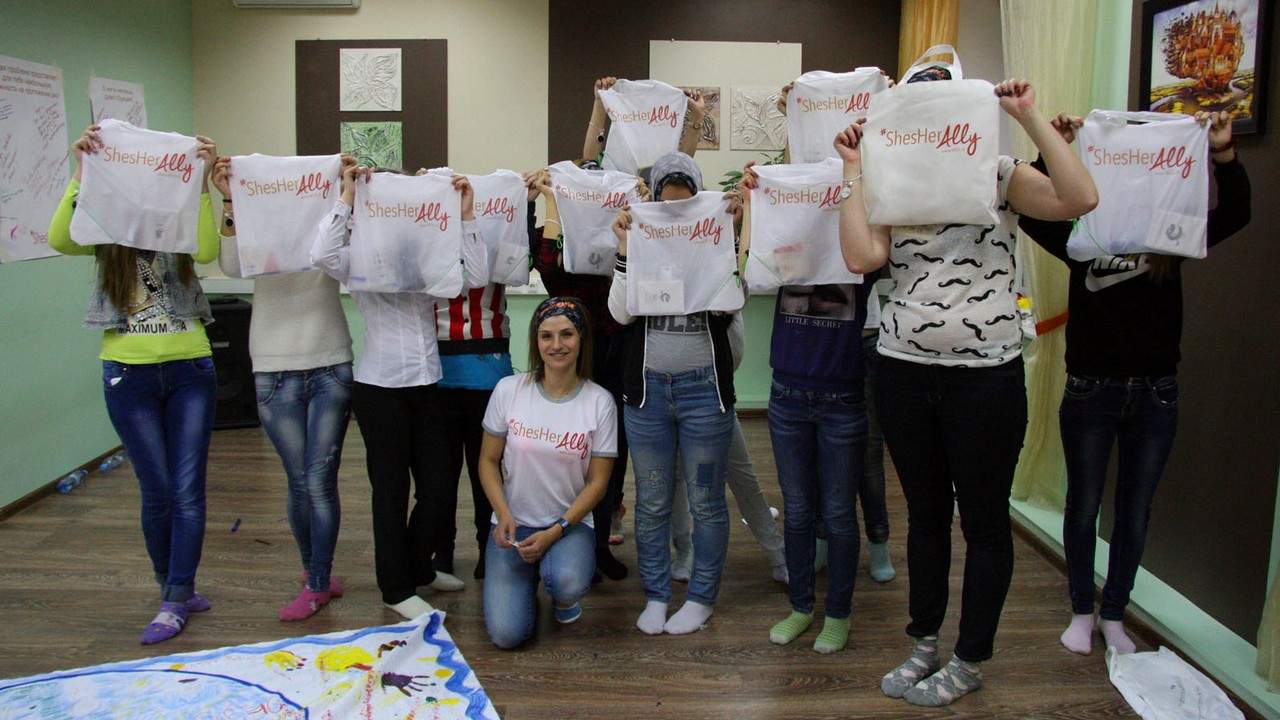 At the end of the event each girl shared her joy from participating in this world-wide initiative. Many of them asked if these events could be held more regularly, considering it is “significantly more interesting than counseling with a psychologist or taking part in the trainings at school””.

“I decided to participate in this training because I am very interested in helping each girl who is affected by HIV cope with their status and perceive it as a usual chronic disease and not close herself off but rather have the possibility and inner strength to talk about her status and take the treatment connected to it. I work to help our teenagers living with HIV become leaders and activists”.

International Day of the Girl Child is celebrated on the 11th of October. This date was chosen by the UN General Assembly as a sign to recognize the rights of girls and the unique issues that they face across the globe. The first international day of the girl child was celebrated in 2012 and it was dedicated to an issue that is relevant for many countries in the world: child brides. In 2013 the day was devoted to the topic ‘Innovative approaches to educating girls’ and in 2014, to recognize the important role of investing into and expanding the rights and opportunities of teenage girls as well as to warn of and eliminate all forms of violence girls are exposed to, the topic was ‘expanding opportunities for teen girls: ending the cycle of violence’.

On behalf of the International Day of the Girl Child 2015, the chapter of AIDS Healthcare Foundation – initiative Women Of Action – held events in various countries for HIV-positive girls and girls affected by HIV. The hashtag for this day is: #ShesHerAlly. 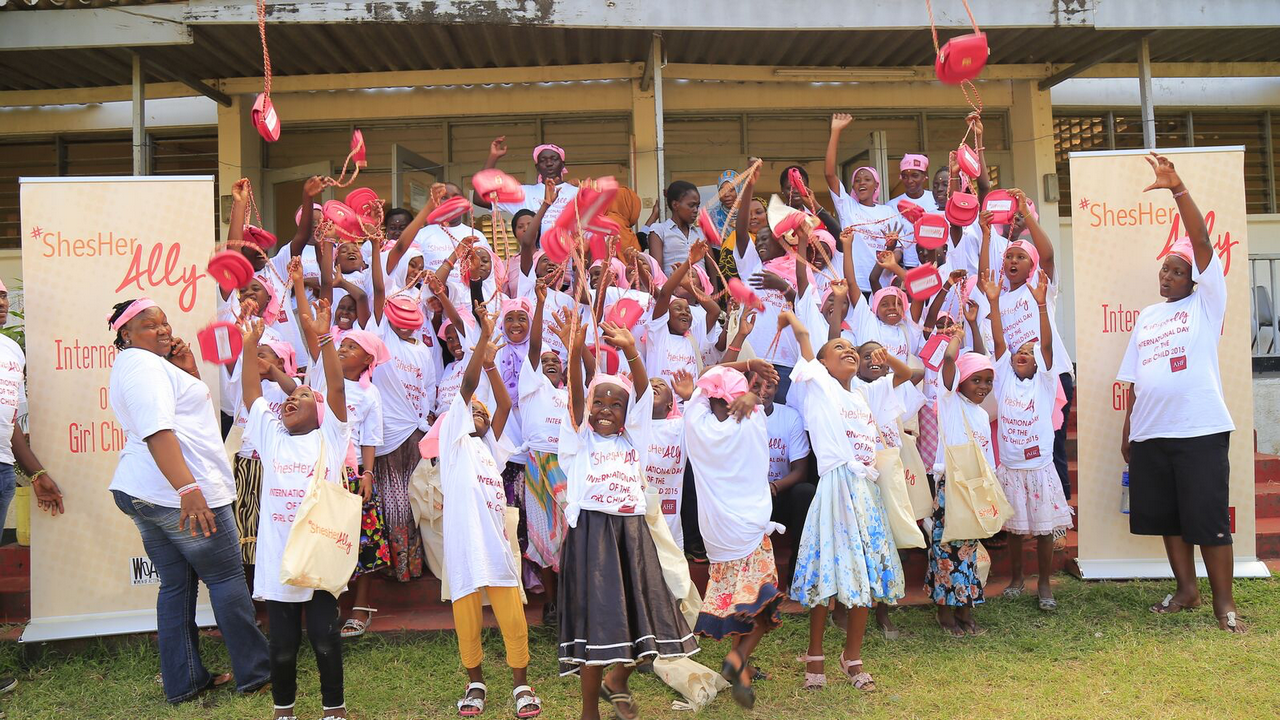 Events
Students from the School of Higher Economics Were Told About HIV
26.10.2015
Events
NP E.V.A. helps specialists from orphanages in Saint-Petersburg
02.04.2015
Events
Visits to the orphanage for HIV positive children in Ust-Izhora
05.07.2013
Events
Participation in Conferences
05.07.2013
Support E.V.A.
Donate